How to Spot a Decision-Maker Within a Target Client Organization 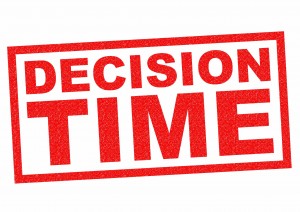 If you’ve been following this blog, you now know how to spot a champion and a navigator within your target client organization. The next most important person to identify as you’re building relationships within the organization is the decision maker.

I joke that you can identify decision-makers by the speed of their walk, but it’s only funny because it’s true. The decision-maker walks fast, tells you they make decisions as a team, and almost always tries to convince you that someone else has the power.

The decision-maker might be the hardest person to identify in an organization. It takes real detective-work – that is, client intelligence – to discover this person.

Don’t Let Him Fool You

I’ll refer to the decision-maker as “him” throughout this post, but let me be clear. This person can just as easily be a woman.

The standard sales process is to look as high up as you can in the organization – but this is a huge mistake.

The higher you go on the org chart, the less those people care about the scope.

Look for the person who emotionally cares about the strategic intent, how well the supply chain is working, how well the organization is structured.

Here’s a perfect example. My wife is a CIO of a big multi-national company. You would probably assume she’s the decision-maker because she “owns” all of the information technology issues in the company. But you’d be mistaken! There are four or five people at lower levels who emotionally care even more than she does about leveraging technology. She might sign off on the purchase, but those four or five people are the real decision-makers.

As I mentioned, you have to be a real detective to find the decision-maker in your target client organization.

At first it’s almost a shot in the dark. You have to hang out with the organization for a while from an emotional-intelligence standpoint and you have to listen to the navigators to begin to narrow down the list of who the decision-maker could be.

But don’t stop there. Go outside the organization for insight, too. Talk to other people who have done business with this client. Talk to your project delivery partners who have had interactions with the client organization.

Get ten answers to “Who is the decision maker?” before you even start narrowing down the possibilities.

Unique Traits to Look Out For

Decision-makers can spot an agenda a mile away. They can tell within seconds of picking up the phone if you are just trying to sell something and you don’t actually understand what they’re trying to do in their organization.

Remember, the decision-maker is emotionally invested in the purchase. If you can’t hit that emotional note with them – if you can’t communicate that you know what they’re up against, you care about what they care about and you are prepared to help them solve their problem – you’ve failed before you started.

If the scope goes wrong, there are personal consequences for the decision maker. No matter how calm they sound, they are worried about this. They are worried about stock prices, about having to fire people, about losing customers or having to explain to donors what went wrong. They are connected to a much bigger organic picture of their institution or corporation.

Every once in a while, a decision-maker will own up to the role. Pay attention if someone says, “I’m the decision-maker.” They’re not lying.

After navigators and champions, decision-makers are the most important people to identify in a target client organization. They’re also the hardest to spot.

Take your time and do your research. Identifying the decision-maker takes some serious detective work.

Then, before you pick up the phone to talk to the decision-maker, do your due diligence. Gather as much client intelligence as you can and listen to what the navigators are telling you about the client organization. Understand exactly what’s at stake for the decision-maker before you even think about reaching out to them.