If you’re in a role accountable for revenue generation, you no doubt have built and cultivated numerous partnerships over the years. But, have you wondered if there was more you could be doing to leverage your partnerships?

In this month’s video, I talk about the difference between networking and cross-collaborating, as it relates to strategic partnerships. Watch to learn more about the mindset we coach around The Greater Good. 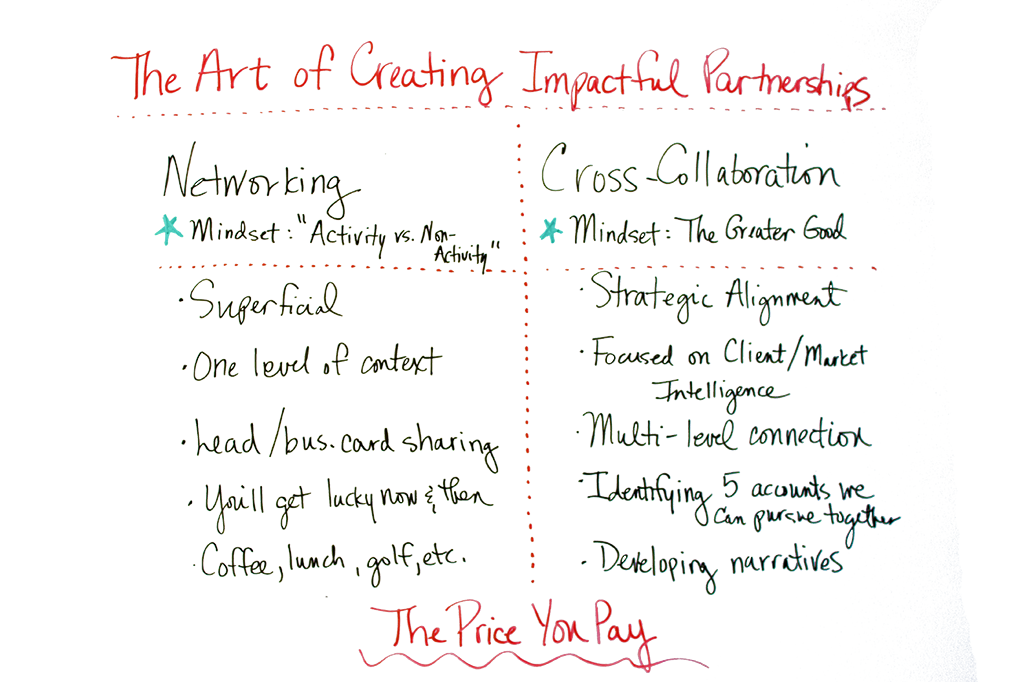 Today I want to talk about the art of creating impactful partnerships.

And it all came to mind over the last couple weeks in our practice when we watched an existing client connect with a firm that we really respect. Here was the interesting element in that interaction. These two firms have known each other for over 10 years. Their CEOs were connected. They’ve done almost a billion dollars of work together. But as I watched them interact, and as we facilitated that process, it was fascinating to see how they really had just stayed connected in a networking type fashion, as opposed to a cross-collaboration fashion. What did that really cost them? Well, they’re both excellent firms, but maybe it would have cost them some speed and revenue and growth in their respective firms individually.

Networking is a mindset. It’s about activity versus non-activity. It’s not wrong, but it’s a little bit superficial. And it only focuses maybe on one level of context, not just one level of contact. Again, it wasn’t wrong that these two CEOs knew each other, but it was amazing all of the aspects and context that they didn’t know about each of their respective firms. Like they had gone into several other businesses, they were almost holding companies. They were each growing in ways that the other one had no suspicion on. Networking begets lead sharing and business card sharing. Again, not wrong, but one dimensional. You’ll get lucky now and then and maybe you’ll hit the jackpot and maybe things will grow. It’s about coffee, lunch, golf, other types of socializations. This is not wrong. But it’s not maybe as robust and creates enough speed from a growth standpoint.

Now let me compare that to what we coach our clients on, which is cross-collaboration. That’s about a mindset that’s really important to us and our book Reset– the greater good. So it’s about strategic alignment. It’s about focusing on connecting with other partnership type firms that have client intelligence in vertical segments that you’re trying to grow, with target clients you’re trying to build a relationship with. It’s a multi-level connection, and it’s a multi-level context type discussion that you’re going to have. But here’s the most important thing. It’s about identifying four or five activities that you’re going to do from this point on out. It’s not about what’s the next dinner, or how are we going to get to know each other just relationship wise? It’s like, how are we going to work certain industry activities together? How are we going to come at strategic clients that we’re interested in building a relationship with together? Not as a joint venture, but maybe sharing again client intelligence. It’s about developing those narratives together.

So here’s the punchline. There’s a huge price that you may not realize that you’re paying by just doing networking and not doing cross collaboration. Again, networking is not wrong, but the subtlety of the skills involved in cross collaboration I think could help your firm and your team grow much faster than you suspect.

Well, thanks for listening this morning, and be safe.