When it comes to executing your plan, have you ever felt like you are trying to drive forward by watching your rear view mirror?  We know you want to see progress, but are your time and energy being devoured in the whirlwind of urgent activities to maintain day to day operations that you run yourself ragged trying to measure everything and wonder if you are even moving forward?  If most of your numbers are lag measures (after the fact), it does not mean that you are a poor leader, it means that the game has changed and you need help executing a winning strategy.   In these changing times, you may relate to Mickey Mantle when he said,

“It’s amazing how much you don’t know about a game…you’ve played all your life.”

At a time when companies and organizations are discovering that they must do more with less, we have found important lessons for the world of business in the book/movie Moneyball. 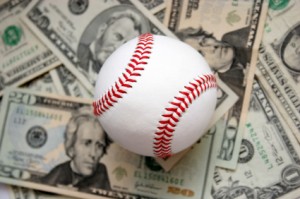 As Michael Lewis describes in his book, the Moneyball strategy emphasizes a sophisticated understanding of data and statistics to help small budget baseball teams compete with their higher-spending rivals.

Let’s say you are trying to assess performance.  Are you like old-time baseball scouts who have been around so long that you’ve developed a gut feel for which statistic matters most?  As described in Moneyball, the Oakland Athletics discovered the metrics that the scouts used to pick the players had little to do with whether those players would score runs.  General Manager Billy Beane hired Peter Brand, a young Yale graduate, who said “There is an epidemic failure within the game to understand what is really happening. And this leads people who run Major League Baseball teams to misjudge their players and mismanage their teams.”  They had been measuring the wrong thing.  Many executives may be making the same mistake.  In our practice, we have observed that many traditional business practices are no longer working.   Though each company and organization is unique, these principles can help you out-think your rivals and execute a winning strategy that produces results.

5 principles to help you execute a winning strategy:

1.  If you are feeling frustrated by a lack of results, then it is time to change the game.

For example, Michael Mauboussin, chief investment strategist at Legg Mason Capital Management and an adjunct professor of finance at Columbia Business School, tells about a time when he was asked to take on a project to better understand the company’s profitability.  He said, “Part of my charge was to understand the division’s profitability by customer. So we estimated the cost we incurred servicing each major client. The results were striking and counterintuitive: Our largest customer was among our least profitable. Indeed, customers in the middle of the pack, which didn’t demand substantial resources, were more profitable than the giant we fawned over.  What happened? We made a mistake that’s exceedingly common in business: We measured the wrong thing. The statistic we relied on to assess our performance—revenues—was disconnected from our overall objective of profitability. As a result, our strategic and resource allocation decisions didn’t support that goal.”

This mistake permeates businesses and organizations, maybe even yours, driving poor decisions and undermining performance.  Choose the best statistics in order to reach your business goals.

In our recent blogs on big data, companies who utilize big data and high performance analytics (HPA) are changing the game and sweeping the world in terms of competitive differentiation.  Successful companies have the supportive capabilities to fully leverage data and analytics.  They have the capacity to build advanced analytic models and the critical management muscle to transform their organization.

2.  In order to change the game, business has to examine the business and political issues to make wise decisions.

In Moneyball, Peter Brand explains why the team is not winning.  He says, “People who run ball clubs, they think in terms of buying players. Your goal shouldn’t be to buy players, your goal should be to buy wins. And in order to buy wins, you need to buy runs.”  He goes on to say, “Baseball thinking is medieval. They are asking all the wrong questions…”  In business, are you asking the right questions?

In Moneyball, Lewis describes how the A’s team used to rely on the opinion of talent scouts, who assessed players primarily by looking at their ability to run, throw, field, hit, and hit with power. Having been around the game all their lives, most scouts had developed an intuitive sense of a player’s potential and of which statistics mattered most.  But their measures and intuition often failed to single out players who were effective but didn’t look the role.  In turns out that looks had little to do with the statistics that were actually important: those that reliably predict performance. Before GM Beane, baseball managers used to focus on team batting average when they talked about scoring runs. But after doing a proper statistical analysis, the A’s front office recognized that a player’s ability to get on base was a much better predictor of how many runs he would score.  Because on-base percentage was underpriced in relation to other abilities, the A’s looked for players with high on-base percentages, paid less attention to batting averages, and discounted their gut sense. This allowed the team to recruit winning players within their low budget.

This is also true of many business executives who seek to create shareholder value by relying on intuition in selecting statistics. The key performance indicators, the metrics most often used to measure, manage, and communicate results, include financial measures such as sales growth and earnings per share (EPS) growth in addition to nonfinancial measures such as loyalty and product quality.  However, how connected are these measures to the objective of creating value?  Why do most executives continue to lean heavily on poorly chosen statistics?  That would be the equivalent of using batting averages to predict runs.  Like seasoned baseball scouts, do you have a gut sense of what metrics are most relevant to your business?  In today’s world, overconfidence in intuition may no longer be effective, or might even be flawed, causing your decision making to be skewed by cognitive biases.

3.  When you change the game, expect resistance and push back from people on your team and leadership.

Is change easy?  No, change requires smart data, smart analysis, smart clients, smart partners and plenty of backbone.  GM Beane in Moneyball gathered hard data and expert statistical analysis from a smart partner and still met huge resistance from his team, direct reports, supervisor and the public.  Most people (executives included) would rather stay the course than face the risks that come with needed change.  Unfortunately, maintaining the status quo is a well-documented tendency to avoid a loss even if we could achieve a big gain.  A business consequence of this status quo bias is that even when performance drivers change, as they often do, executives often resist abandoning existing metrics in favor of more-suitable ones.  For example, acquisition rate of new customers is an important performance metric for a new business, but as the company matures, its emphasis should probably shift from adding customers to better managing the ones it has by, for instance, selling them additional services or resolving customer issues. The pull of the status quo, however, can inhibit the needed shift.  To resist push back from people on your team and leadership, keep your objective the top priority.  Consider input from your operations and technical team, not just your sales and marketing team.

4.  Expect to fail fast in the beginning but hang in there.

Even after you have implemented factors to help you achieve your objective and you are engaged in activities that lead to that outcome, you will probably experience some failure at first.  This is the most tempting time to throw in the towel, but you need to fail fast and realize that success is just around the next bend.    One of our most successful clients experienced what appeared at first to be failure when implementing a change in the leadership team.  But as the new leadership team discovered, once they started problem solving collaboratively between departments instead of the previous silo approach to solutions, they were able to produce a better product with better results.

5.  Success will come with time and persistence if you work at it.

Demonstrating a causal relationship between the actions taken and the outcome measured can help you effectively predict your success.  But you must also be persistent to show the outcome of one action at one time will be similar to the outcome of the same action at later times.

Strategy is evolving at a rate faster than anyone ever imagined.  A winning execution strategy begins  with a willingness to change the game.  Then, ask the right questions, analyze the right data, collaborate,  and persistently pursuing the right objective that adds shareholder value and gives you the competitive advantage.

Moneyball:  The Art of Winning An Unfair Game by Michael Lewis

“Sowing Failure, Reaping Success:  What Failure Can Teach”, by Daniel Slotnik and Katherine Schulten, The Learning Network, The New York Times, May 7, 2012  http://learning.blogs.nytimes.com/2012/05/07/sowing-failure-reaping-success-what-failure-can-teach/