What and Who You Don’t Know that Can Hurt You 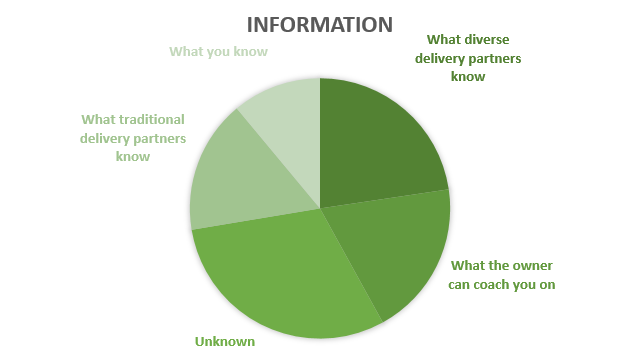 People in the corporate world tend to rely in excess on networking and what they think they’re getting out of it. The issue is, they tend to network individually and not collectively. It’s not bad, but it’s limiting to the organization.

People also tend to network with others that they know and who they’re already connected with in their food chain. Meaning, you may meet new people that have more impressive job titles, but they’re a part of the same industry and networking community as the last person you met at a mixer. You’re not making as much progress as you think. You’re not truly expanding what’s missing from your network that could help you.

When you’re caught in food chain thinking, you’re caught in what you already know. I invite you to get outside of that style of thinking. Get into non-traditional partners and people that are connected to potential clients in a different way.

Why do I want to talk to someone outside of my food chain?

The answer is simple: they’re also talking to your client. That’s why. And they have a different perspective on that client’s decision making dynamics, business & political issues, and the elements like: what’s going on with their staff, who are they competing with, what’s going on with their operational model. Not only will they know these things, but they’ll know them in a deeper way than you’re inclined to know. Furthermore, they are less resistant to share that information with you because you don’t compete in the same food chain.

The risk you take

When you’re more courageous and surpass the boundaries of scope delivery and project delivery, you take a worthwhile risk. People write down RFPs and RFQs as if they can really can describe the solution they are seeking, but they’re just like every other human being on this planet. Did we know we needed a smartphone before it came out? Of course not, there was no RFP for that. What were we all missing there?

Part of the genius of someone like Steve Jobs is that he saw what was missing and made an educated guess. He sought out different perspectives. What you don’t know can hurt you because someone who is trying to connect with your client may make that educated guess and beat you to the punch.

When you think you’ve exhausted everything you know that is hiding in plain sight, ask yourself the following questions:

The Connection Process is all about seeking knowledge around business & political issues, and then connecting those issues to your impact and value. The more valuable insight and knowledge you collect, the better positioned and prepared you are.