The Value of Disruptive Dialogue to Grow Your Business

A generation ago, people used to often sit around a table to eat, discuss, debate and solve problems.  Today, we may sit together in the same room and people text each other.  Is dialogue dead or just different today?  What valuable role can disruptive dialogue play in growing your business?

Fast Company devoted their whole February issue to the importance of speaking up and listening.   When reading the article, “10 Conversations That Changed Our World”, 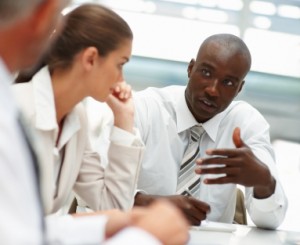 you notice that the inspiration behind big, life-changing innovations such as laptop computers, ATMs and iPhones came while in conversation with others.  Not just ordinary conversations, but often passionate, disruptive conversations.  Not whining, which is self-pity turned outward, but conversations stemming from a stirring inside that drives your decisions and actions.

For example, most of the technology that we consider essential today were a result of a group of  eight dissatisfied employees who enjoyed working together and formed the first venture-backed startup which gave birth to the first wave of Silicon Valley companies.   Steve Jobs and Ed Catmull discovered they were speaking the same language in a conversation that led to the development of renowned computer-animated film studio, Pixar.  Wendy Kopp visioned “Teach for America” and gathered 500 recruits but could not launch until she had a disruptive conversation with a billionaire industrialist, Ross Perot, who eventually agreed to fund the first $500,000 and thus inspired the confidence of other investors.

In performance driven organizations, it is important in these conversations to remember your ultimate goal and the essence of your brand.  For example, when Howard Schultz returned as Starbuck’s CEO in order to turn the company around, he was talking with large institutional shareholders who urged him to cut health care benefits to save their financial crisis.  Schultz defended the benefits by explaining the essence of the Starbuck’s brand is humanity in the form of comprehensive health-insurance coverage and equity in the form of stock options for employees over 20 hours per week.  Schultz said, “I’m not building a stock.  I’m trying to build a great, enduring company.”

In an age of information overload, better dialogue becomes even more essential.  Here are 6  components of a great conversation:

At first glance, conversations today may seem to be a rare commodity, but the dialogues that inspire innovation rarely happen in silos.  Take a risk.  Transcend traditional thinking into creative conversation by drawing upon disparate perspectives to illuminate new ways of thinking.  It may be disruptive, but this kind of dialogue can be the driving force needed to grow your business.