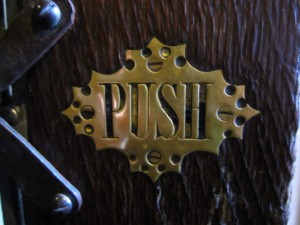 Being a manager would be a lot easier if it weren’t for people, so they say. Whether you’re managing a project or working as a change agent, setbacks are a given. There’s almost always that one guy who seems to just hate your product or service. What do you do when this problem comes up? How do you deal with push back?

First, what you don’t do:

Don’t ignore it. The illusion is that if you ignore it, it will go away. Unfortunately, with that thought process, you fail to acknowledge that people who are focused on stopping something are persistent. It’s easy to underestimate that.

The second illusion is that confrontation will solve it. Classic confrontation is exclaiming to the other person, “What on earth are you doing?!” This doesn’t work.

The only thing I’ve seen work successfully is to go the person who is the root of that information, be very matter of fact and say “I’m comfortable with you being u­ncomfortable with what we’re trying to accomplish here. And I’m determined to not shut that down. Your discomfort could likely lead to a better solution that involves what we’re offering AND some of your ideas. I understand what you’ve said, but what is it that you want to hear, with your concerns?”

I just assume that the person who I’m up against has much more influence than I could possibly imagine. I’m going to assume that I don’t understand all of this, even though I speak the language. Then I declare to start a journey of listening and collaboration with this person alongside everyone else in the organization. Because that is probably going to get a better solution.

This approach is often very disarming. I’m not trying to trick them, play games, or discredit them. I address the situation head on with readiness to learn from this other person so that we may both succeed. If you’re not pushing back on them as a reaction to their resistance, they have less to resist. I’ve found that many people who are resisting don’t even know why they’re fighting. It could be that you’re a big firm, it could be that you’re a small firm, it could be that they don’t like the technology you’re using, they’re resistant to change, anything.

Why does it work?

The baseline premise of dealing with someone who is pushing back is to thin slice what the push back is about. You’ve got to get into veterinarian mode, because often they can’t explain it themselves. And if you ask for a plain explanation and they give you one, often it’ll throw you off. Because it’s really the problem behind the problem that you should be concerned with.

It could just be that the last five decisions have been shoved down and they’re just sick of it—and now you’re up. So they’re fighting, and it has nothing to do with you. It could be something as simple as that. So when you try to try to go through logic and explain it—it won’t work.

Selling technology teaches you to think linear and use logic, but when you’re dealing with people, you’ve got to get used to the fact that all logic could likely go out the window. You’ve got to give the other person power. People have a hard time doing that. Let the other person know that you’re listening to them, empower them, and succeed together.

When someone pushes against you, don’t push back. If something is being pushed on opposite sides by the same amount of force, you’ll notice no movement is made.

If you’re confrontational or try to ignore the problem, you lose.

The best way to work on a team is to empower others to contribute solutions, not always being the one who is right and takes credit.