My Experience at The 2014 P3 Conference 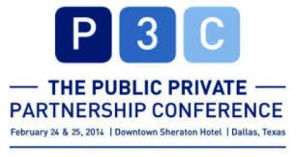 Last week, I was in Dallas for The 2014 P3 Conference (Public-Private Partnership), or P3C. P3C’s goal is to gather people together who are decision makers. Trustees, city officials, state officials, people from the owner’s side who need funding, and they link them with people who have financial solutions or design solutions. Pulled together, these people create discussions about possibilities for partnerships.

Mike Marasco, in the opening discussion­­, set the tone for the rest of the conference. He said, “This is not about funding, here’s what it is about–this is a political will discussion.” People think the issues lie in finances, but it’s often a much bigger picture problem. There is more than adequate money and know-how from the design and construction community, from the asset management community, and the financial community. What the conversations at this conference centered around was the structural weakness of the U.S.—which is that we’re a non-collaborative, single source society.

Every discussion that I was searching for answers to similar questions:

These healthy discussions were going on between huge companies. Previously, companies like this would talk about their expertise and their successes. The smokescreen that’s been going on for a long time in public private partnerships, like I mentioned before, is that it’s about finance. It’s not about finance. It’s about creating an asset that functions over a long period of time and signing that agreement.

How this relates to our practice…

Every owner that we coach asks how to move capital expense along. It’s often in a clumsy way, such as, “How do we find funding?” or “Can’t we get a P3 situation in here?” They’re looking for money, and they’re hoping that someone on the outside is just waiting to give it to them.

Stopping scope because of budget constraints is the number one thing that clients don’t know how to get around. The conversation about public-private in itself moves scope forward and what I’m interested in is getting owners unstuck, convincing service providers to stop selling, and thinking of ways to deal with moving scope forward—rather than just trying to find money. I encourage clients to rethink buildings as an asset rather than a project. After all, it is an asset you can build, manage, and create operational savings out of. This is a very different perspective than a project that needs funding.

The past generation of service providers have been really lazy. They know corporations and institutions have money, and they just want a budget so they can draw, design, build, or implement. But we’re at the end of that era. We have to find ways to creatively help people, to help institutions, and to get over that hump.