Don’t be Afraid to Ask: the Importance of Crowdsourcing 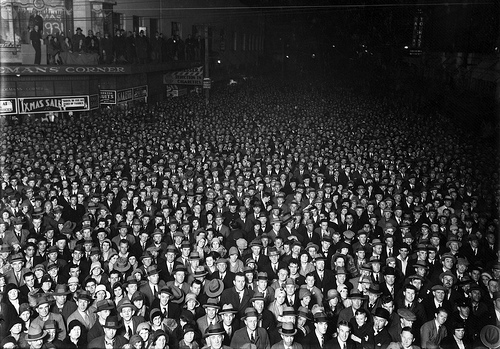 If you’re a subscriber to this blog, you may have noticed that I’ve been working to create my own video series. This is a new endeavor for me: I have four people in the room, and in between cuts, they’re each tearing each word I said (and didn’t say) apart, analyzing all of my body language, and pointing out speech disfluencies I hadn’t noticed before. Though I’m new to going through the stress of making a video—and people telling me about tics—I’m not new to asking for others’ opinions. I find it’s the best way to ensure that you’re putting out your best work: whether it’s in making a video, developing an account team, or creating new solutions.

What difference does it make?

It makes a big difference. For one, you make better decisions. When you have several people in the room, with different world views and opinions, there’s shoving that goes back and forth: one may think the issue lies in one place, while another may believe that’s not a problem and another area is what needs our focus. When that push-pull goes on, we delve deep into the bigger issues.

When we pursue work as a team, we pick up on different things. And each “thing”- that’s room for improvement.

But there’s some people who I don’t need to listen to, right?

There’s a lot of articles out there about the millennial crowd. I say, ask the 25-30 year olds what they think. Often, baby boomers don’t want to ask millennials what they’re thinking. They have this notion, “Well, they don’t know anything.” That’s all the more reason to ask them. When they’re cold to the subject, they’re quick to see flaws that others, who are well seasoned, would overlook.

That goes for any set of people who you may have reservations about asking for their opinions. You don’t have to follow through and please everyone, but just knowing the impact it can have on someone else gives you a better idea of what the end result will be.

How do I get people to open up with their opinions?

It’s crucial for leadership to facilitate and set the stage for opinion sharing. People don’t naturally want to give opinions-they’ve been shot down too many times, they don’t want to hurt anyone’s feelings. My job, and the job of a manager, is to listen and pay attention to people without pandering. I have to elicit opinions and allow for you to know why I’m asking questions. We all differ in many ways: age, gender, style, knowledge of a specific field. But that’s to our advantage—our differences enable us to notice more things as a team. Things that need improvement, things that need to be scrapped. The collective opinion is what makes the deliverable better.

So Here’s the Bottom Line…

Crowdsourcing creates a deliverable that is better.

You should allow for opinions to come in from all sources. Don’t limit yourself to your peer group or experts. You’ll be surprised at the insight you can receive from someone who you wouldn’t expect to make an impact.

It’s a leader’s responsibility to elicit opinions from others and explain why their opinion is valuable. People are hesitant to give their two cents and it lies on the leader to encourage those people to put their guard down.