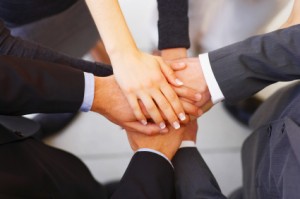 Building a cohesive, productive team is challenging.  Even the best teams struggle to improve effectiveness.  Some teams have individual team members who are excellent in their own silos, but are not that interested in working as a team or achieving team goals.  How do you get them to look to the forest beyond the trees?  Other teams have weak team members who don’t pull their fair share for the team and lack genuine teamwork.  How do you move a team from dysfunctional to productive?   We have applied lessons learned in our practice and principles from the book, The FIVE Dysfunctions of a TEAM: A Leadership Fable,  by Patrick Lencioni, to help our clients address the common but potentially lethal pitfalls of teams and build cohesive, effective teams which positively affect the success of the whole organization.

In reality, these pitfalls are not just isolated issues, but need to be treated as interrelated in order for the team to be successful.   Trust is a basic human need.  If trust is absent or weak among team members, team members will not genuinely be open with one another about their mistakes and weaknesses for fear of being betrayed, backstabbed or made to feel inferior.   Trust is essential to building a solid foundation within the team.   Failure to build trust is harmful to the team because it sets the tone for fear of conflict.  Teams that lack trust resort to veiled discussions and guarded comments rather than engaging in unfiltered and passionate debate of ideas.   When teams lack healthy conflict, they lack commitment.   Opinions need to be aired openly in order for team members to ever buy-in and commit to decisions.  If they pretend to agree at meetings, but have not truly committed or bought-in, team members will avoid accountability.  Even the most focused and driven people will hesitate to call peers on counterproductive actions and behaviors if they have not committed to a clear plan of action.  Without accountability, team members become more concerned with their individual needs (such as ego, recognition or career development) or the needs of their divisions rather than the collective goals of the team.  This lack of attention to results can result in failure for the organization.   Like a chain, if any one link is broken, teamwork deteriorates and dysfunction flourishes.

How do members of a truly cohesive, effective team operate successfully?

2.  Engage in unfiltered conflict around ideas.

3.  Commit to decisions and plans of action.

4.  Hold one another accountable for delivering against those plans of action.

5.  Focus on achievement of collective results.

Though it sounds simple, in practice it is extremely difficult because it requires levels of discipline and persistence that are hard for teams to exercise.  As objective outsiders, we are able to assess teams honestly and identify opportunities for improvement within organizations.

Marks of healthy teamwork as noted by Patrick Lencioni in The Five Dysfunctions of a Teaminclude: 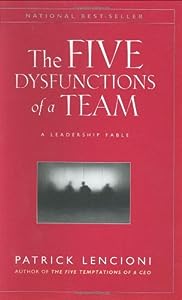 1.  Trust – In the context of team building, trust is the confidence among team members that their peers’

intentions are good, and that there is no reason to be protective or careful around the group.

a.  Trusting team members quickly and genuinely apologize to one another without hesitation when they say or do something inappropriate or possibly damaging to the team.

b.  Trusting team members openly admit their weaknesses and mistakes, ask for help when needed, accept questions and input about their areas of responsibility, and appreciate and tap into one another’s skills and experience.

c.  Trusting team members take risks in offering feedback and assistance, plus give one another the benefit of the doubt before arriving at any conclusions, especially negative ones.

d.  Trusted team members focus time and energy on important issues, not politics.  They waste no time holding grudges, hiding behind masks, or manipulating for power or ego.

e.   Trusted team members know about one another’s personal lives and are comfortable discussing them.  They find reasons to spend time together.

f.  Leaders of teams who trust must create safe environments that do not punish vulnerability or chastise team members who reveal weaknesses or failures.

a.  Team members are passionate, open, honest and unguarded in their discussions of issues.

b.  Team members tap into, extract and build upon the ideas of all members of the team in order to solve real problems quickly.  They also minimize politics within the team and do      not allow personal put-downs or attacks.

c.  Team meetings are lively, interesting, and compelling, and not boring.

d.  During team meetings, the most important–and difficult–issues are put on the table to be resolved.

a.  Team members know what their peers are working on and how they contribute to the collective good of the team.

b.  Team members leave meetings confident that their peers are completely committed to the decisions that were agreed on, even if there was initial disagreement.

c.  Teams that commit create clarity around direction and priorities, align the entire team around common objectives, develop an ability to learn from mistakes, and are able to change direction as a team for the greater good.

e.  Team members are proactive and take advantage of opportunities before competitors do.  They do not revisit decisions over and over again, over analyze or delay action.  They move forward without hesitation or guilt.

f.  Leaders of teams need to be comfortable with the prospect of making a decision that may ultimately turn out to be wrong.  The leader also has to push the group for closure around issues, adherence to schedules that the team sets, and cannot place too high a premium on certainty or consensus.

a.  Team members are deeply concerned about the possibility of letting down their peers.  They meet deadlines and key deliverables.  They strive for excellence and will not accept mediocrity.  They discipline one another in a respectful manner.

b.  Team members call out one another’s deficiencies or unproductive behaviors in order to ensure that poor performers feel pressure to improve.  They reduce bureaucracy around performance management and corrective action.

c.  Team members challenge one another about their plans and approaches.  They identify potential problems quickly by asking necessary questions without hesitation.

d.  Leaders of teams need to shift rewards away from individual performance to team achievement.  They encourage and allow the team to serve as the first and primary accountability mechanism, yet serve as the ultimate disciplinarian if the team itself fails.  They do not strive for a consensus, but a shared team responsibility.

a.  Team members willingly make sacrifices (such as budget, turf, head count) in their departments or areas of expertise for the good of the team.

b.  Morale is significantly affected by the failure to achieve team goals.

c.  Team members are slow to seek credit for their own contributions, but quick to point out those of others.

e.  Leaders of teams set the tone for a focus on results.  They must be selfless and objective, reserving rewards and recognition for those who make real contributions to the achievement of group goals.

Many organizations are finding a need to bring in outside expertise to help them shape healthy teams.  As we coach executives and organizations to make successful transformations, we have discovered that building a cohesive, productive team is indeed challenging but possible with experienced professionals to guide you through the process.